11-05-2017 ~ I had just finished catching up on some sleep, after a long birth, when at 9am I got a text message from Mayana saying she was feeling a lot of pain and some contractions. Mayana was 36 weeks and 4 days pregnant so it was a little on the early side plus her baby was in a breech position. She had a meeting with the Gynacologist planned at 11am the same day to try to turn the baby head down.

She sent me a picture of the contraction timer she had been using and there were 3 contractions on it with 20 minutes in between, lasting a minute long and she said it was already quite painful.

I called her immediately and after hearing she had spots of blood too I told her to call the midwife and then call me back.

The midwife told Mayana to go to the 11am appointment and she would be checked there. I agreed to meet her there in an hour as her husband Juliano had left the house 2 hours earlier and was on his way to Germany for a 2 day business trip. Usually this contraction pattern is very early labour but I felt this could go either way and just had a feeling this was very possibly more than it looked.

A few minutes later I got a call from Juliano in which he wanted to hear my opinion. I told him either the baby was coming today or it wasn’t good news and something else was going on or the third scenario… it would just stop and start again another day.  He decided he did not want to take any risks and would turn around straight away and start driving back towards Rotterdam.

I knew that Mayana was a strong woman and was not going to let on very easily that she was in pain. She had already told me during our preparation meetings that she had a high pain thresh hold. I didn’t trust this was nothing and took my doula bag with me to the hospital.

On the way I spoke to Juliano again and asked at what time he was going to arrive and asked him to pick up the hospital bag on his way.

I arrived at the hospital at 10:30 and as I came up the escalator and saw Mayana’s pale and slightly greenish face I knew something serious was going on in her body. I sat next to her, saw her have one contraction and knew we needed to be seen quickly.

Mayana was waiting to register as she had not been in this hospital before. There was one number before us and I managed to hurry us to the front of the line and a woman magically appeared with a wheel chair to take us upstairs.

We arrived at the day care where the scheduled appointment was to take place and had to wait in the waiting room. Mayana was having very regular contractions at this point and was in significant pain.

At 11:00 I texted Juliano: “Can you pick up the hospital bag on your way. Still haven’t seen anyone but contractions are coming every 3 minutes or so now. I think the baby is coming today”

Eventually we were shown to a room and had to wait again. I felt a real urgency but there was no-one to hurry up and we just had to wait. That 15 minutes or so felt like an age as the contractions quickly started coming every 2 minutes, we called Juliano at 11:17 to say it was picking up fast and he talked to Mayana and encouraged her to stay calm and breathe.

When finally a midwife came in at 11:30 to evaluate Mayana for the external version (attempt at turning the breech baby) she saw that she was clearly in labour and did an internal exam to find that she was 4/5 cm dilated already. The midwife asked if Mayana had thought about how she wanted to birth a breech baby, caesarean or vaginal and did she know the risks. Mayana had already told me in the waiting room that her preference was still for a vaginal birth if the Gynecologist was okay with that.

We were quickly taken to a labour and delivery room. The contractions were clearly getting stronger with every new one that came. I wanted to call Juliano to tell him the situation and to forget picking up the hospital bag but Mayana needed me and I didn’t get to it.

The same Gynecologist who was scheduled to do the external breech version, came into the room. She repeated the question if Mayana had thought about how she wanted to give birth and talked briefly and very quickly, and in between two contractions, about the risks of vaginal birth vs Cesarean. The contractions were coming very fast and it was very intense for Mayana. The Gynecologist checked Mayana again and she was 8cm dilated. It was 11:45!

At this point the Gynecologist said that it was too late for a caesarean and that the baby would be born very soon. I looked at my phone to try to call Juliano and saw  that he had tried to call me at 11:46. I tried to call him back but no answer so at 11:55 I quickly texted him before the next contraction came:

A few minutes later he entered the room.

Mayana was happy to see him and even though he was all dressed up in his work clothes, he embraced her straight away and helped her try to focus through the intense pain. Very quickly her body started to push with the contraction and it was clear the baby was coming soon. The Gynecologist checked she was fully open and felt that the baby’s bottom was almost at the opening. She guided her through the process and after two contractions we already saw the baby’s little bottom coming out. Truly amazing! With the next two more contractions Mayana pushed like a champion and two little baby legs flopped out and then the Gynecologist helped guide her head out and there she was, sweet little Helena! 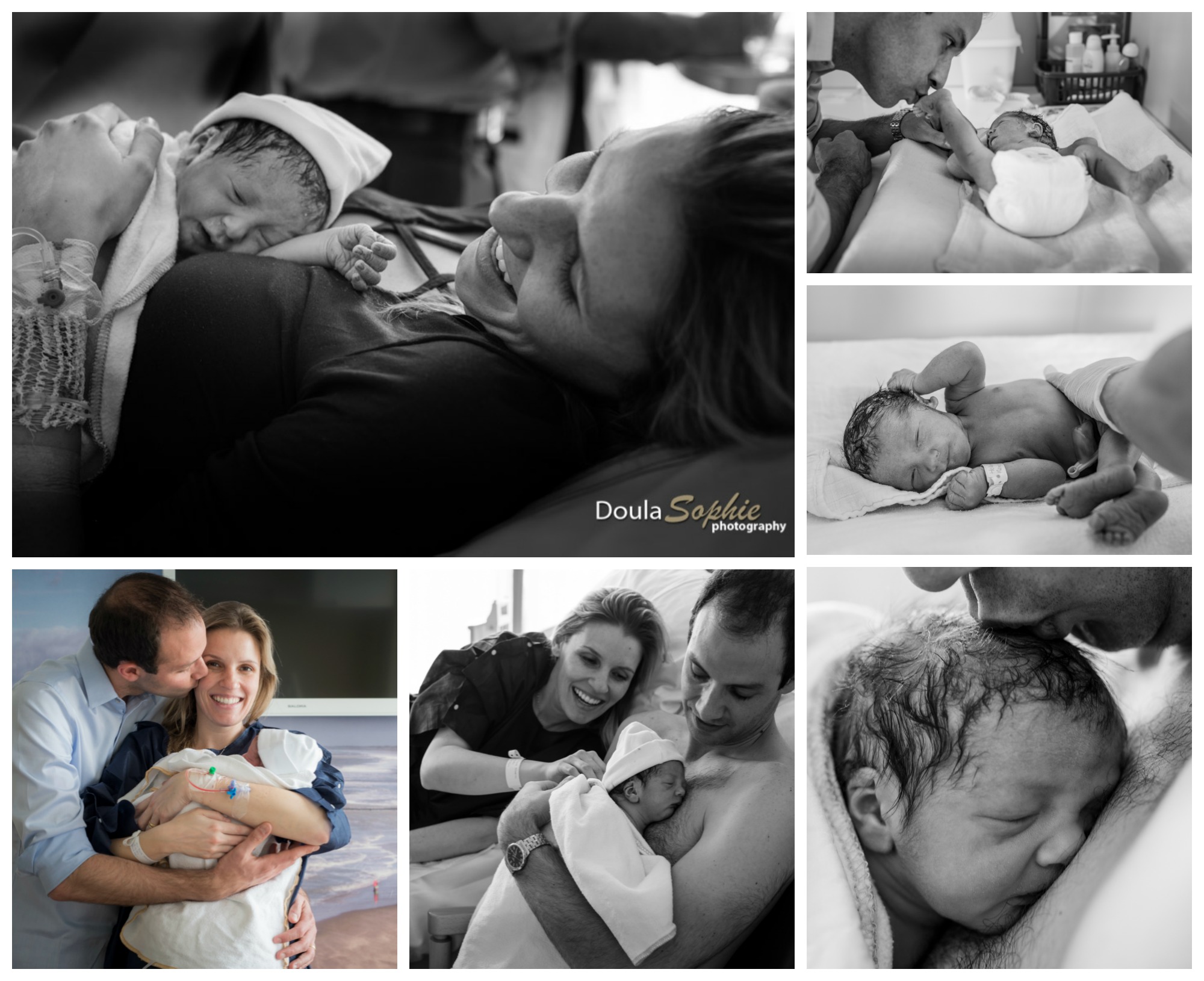 We have lost the art of vaginal breach birth because in recent years Gynecologists have tended to advice women to choose a cesarean birth for a breach baby because they believed it to be safer. This is not necessarily true. It is so great to see that the wisdom and experience is slowly being gained again as women and Gynecologists are daring to choose to birth breach babies vaginally. I have been thrilled to witness two this year!